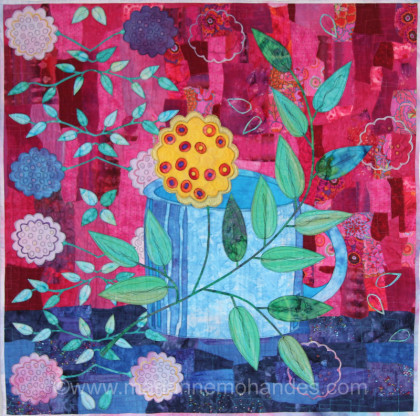 "My Favourite Mug" quilt was part of some work which I started at Missenden Abbey on a Taking Textiles Further course with Janet Edmonds.  It was shown at The Festival of Quilts in 2014.  The background is constructed of overlapping raw edged fabrics which are quilted with a zigzag stitch.  The designs on top are raw edged appliqued with added embroidery and free machine quilting. 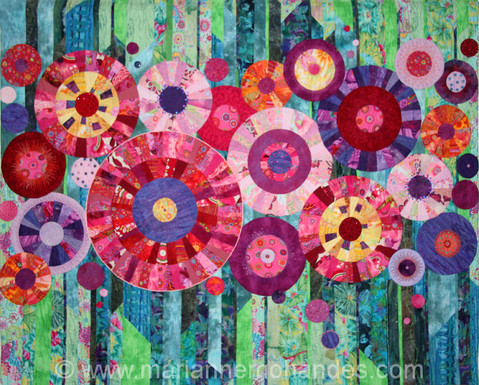 This quilt was inspired by a traditional design, which I used to create a cushion for a workshop, which I used to teach.  I enjoyed the technique and decided to make a large quilt to celebrate reaching 5 years after being diagnosed with breast cancer. The shape reminded me of large flowers  to represent the celebration and also the shape of the breast.

The quilt was shown at the Festival of Quilts in 2013 and was also nearly left on the train when I was delivering it, up in London. I was just going to step on the bus to Islington when my sister realised I had left it on the train.  Luckily the train was still in and after a manic dash I managed to retrieve it! I had not yet taken a photo of the quilt and might have lost it for good. This incident is what my husband calls a "Yapccident" ! 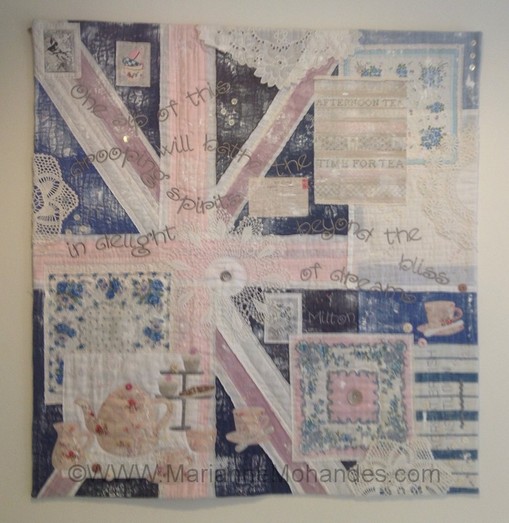 Britain, What it Means to Me

I made this quilt to enter into The Quilters Guild Challenge at the Festival of Quilts with the title of "Britain What it Means to Me".  I chose the theme of tea and a quote from Milton an old English poet which reads, "One sip of this will bathe the drooping spirits in delight beyond the bliss of dreams".

It has been made with old and new cottons and lace, which has been collaged with raw edges to make a background featuring a shabby chic Union Jack flag. Afternoon tea has been appliqued over the top along with other items such as hankerchiefs, shirt buttons and a distressed machine embroidered sampler.

It has been mainly made by machine using Husqvarna software in areas, free machine stitching and some hand stitching, and the wall hanging is quilted. 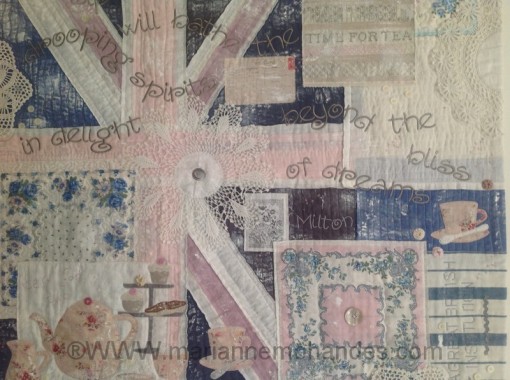 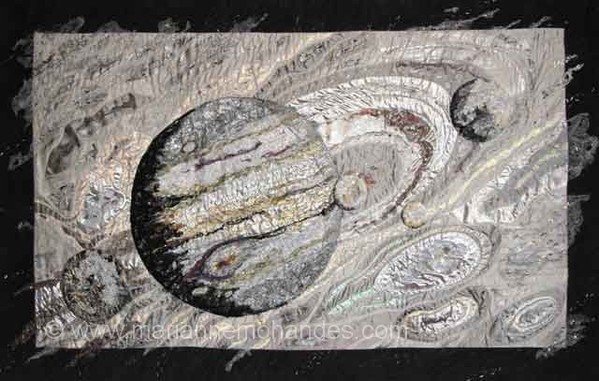 Made as an assessment piece for my City and Guilds Machine Embroidery Diploma in 2006, it was inspired by a quilt made by Ina Georgeta, made mainly in metalics.  I included many embroidery techniques in the wall hanging to create the desired texture.  The quilt shows Jupiter and its 4 moons superinposed on a close-up of Jupiters famous eye.  It was displayed at the Festival of Quilts in 2007. 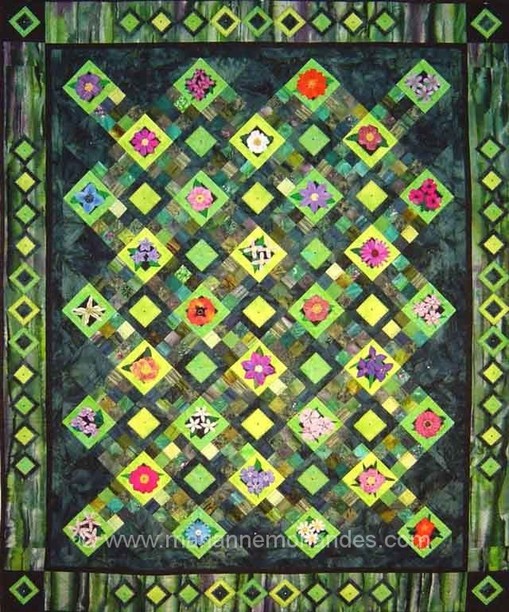 This wall hanging was inspired by a quilt held at the Shelbourne Museum in America.  After making a traditionally inspired one, I thought it would be interesting to design a contemporary version.  It was pieced by machine, and all the flowers was appliqued combining machine and embroidery techniques.  It was shown at the National Quilt Championships. 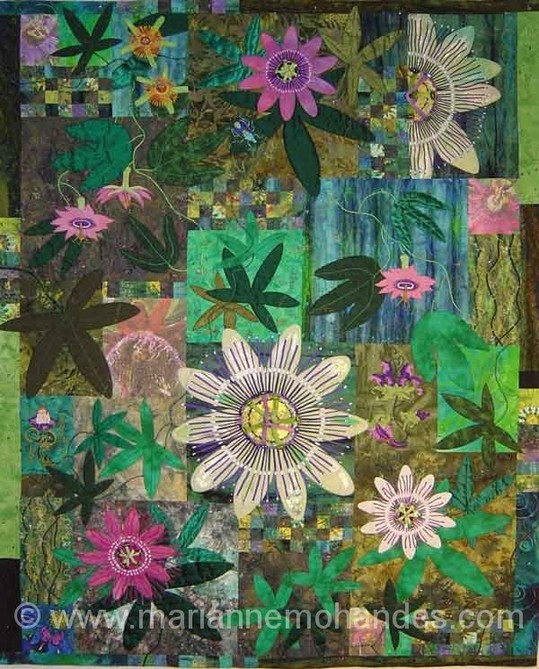 I wanted to make a quilt that incorporated some photographic images and use some of the embroidery techniques which I had learnt at college.  The quilt was displayed at the National Quilt Championships  and it won 1st advanced and 1st embellishments awards.  It was also featured in an article which I wrote for Patchwork and Quilting Magazine in 2004. 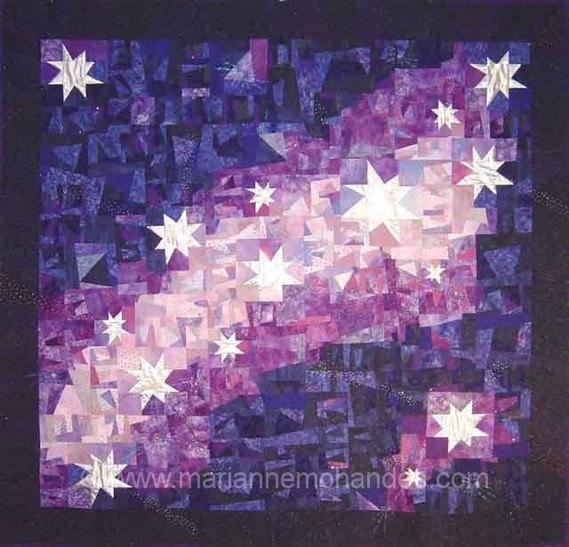 Inspired through an interest which I shared with my husband in astronomy.  It was constructed using my sewing machine and is heavily machine quilted. It was started during a "Whacky Star" workshop with Katherine Guerrier and was shown at the Malvern Quilt Show. 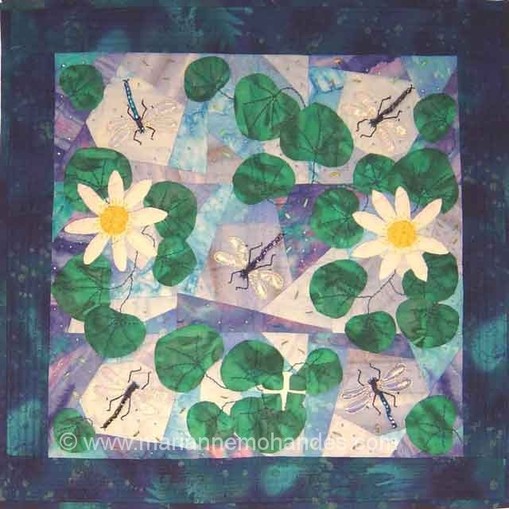 Made for Patchwork and Quilting Magazine as an article, after entering a similar cushion into one of their competitions.  It made the front cover which was very exciting.  The background is constructed using crazy patchwork, and the applique and dragonflies were sown by hand. 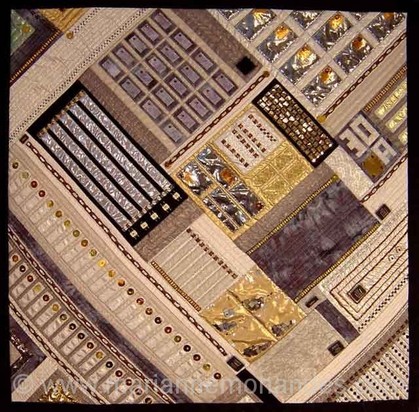 Made for a Spring Festival Challenge in Ardingly, with a theme of "Modern".  It was inspired by my husband who was working in the silicon chip industry at the time.  It is made with natural and many man made materials, including actual silicon chips trapped behind plastic.  It won the competition, which included a sewing machine as part of the prize. 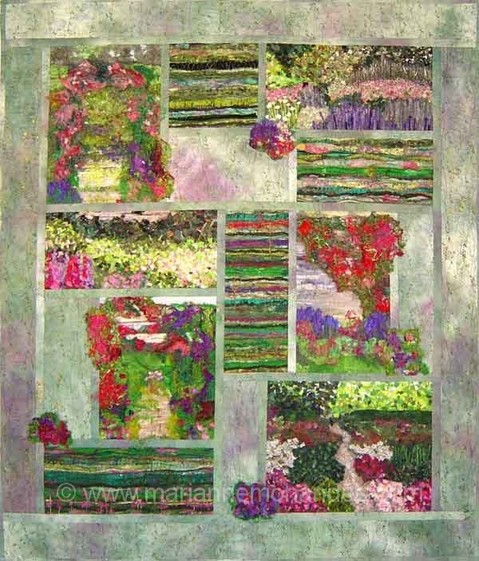 Made for an assessment piece while taking a City and Guilds Machine Embroidery Certificate course.  It was inspired by Monet's impressionist style and samples that I had made in class.  The background is mainly constructed out of hand dyed cotton, and the embroidery includes wool and silk fibres which were sown together using water soluble film. 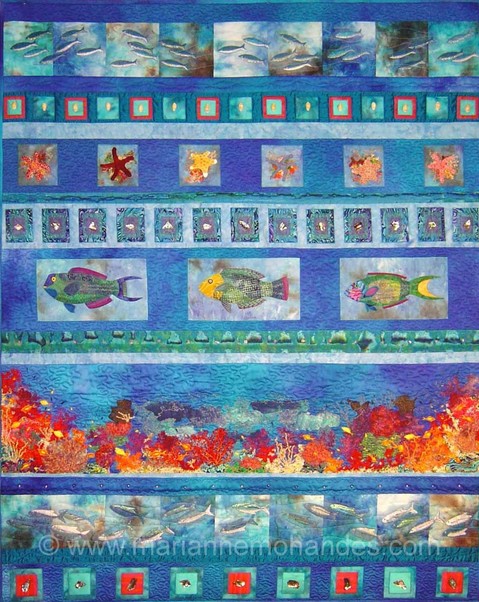 A Strippy quilt made for the Malvern annual quilt show, and which received a judge's merit award.  The quilt is made with a variety of natural and man made fabrics and includes a lot of machine embroidery, especially in the underwater section. 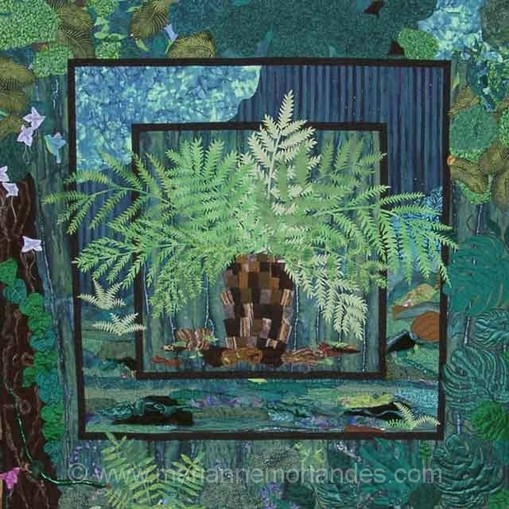 Inspired by a tree fern growing in my garden and made for a quilt show at Malvern.  It made the front cover of the brochure and won a first in machine applique.  It was also exhibited at the International Quilt Show in Houston, Texas.  Made by hand and machine using a variety of fabrics, and machine quilted 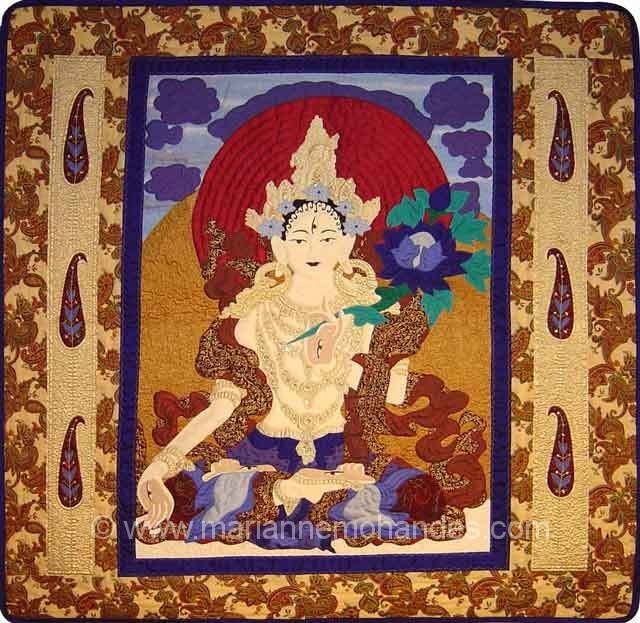 Made for the Hoffman Challenge at the national Quilt Championships, the quilt was inspired by the theme "Shalimar" which was an Indian garden.  It is of a Buddhist nun and was made mainly using the special Hoffman fabric.  The quilt was awarded a runner up prize, and toured the country for several months.