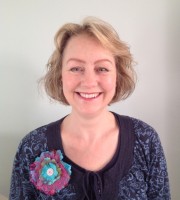 My interest in textiles began when as a child, I spent many hours making dolls clothes.  This naturally progressed to making my own clothes and once married, furnishings for my home. I made my first quilt in 1983, which was constructed from hexagon shapes over paper; a style which was a popular at that time and which is now being explored in new and exciting ways.

I learnt to make quilts properly when residing in America and it was there that my interest in textiles grew.  I continued to make mainly hand made quilts for some years, but my passion really took off when I discovered The National Patchwork Championships in 1989, when I returned to live in the UK.

I began to make quilts to exhibit from this point onwards, and was awarded some prizes, including first machine embroidery with “Tree Fern” at Malvern in 2001, first advanced and first appliqué with “Passion Flower Frenzy” at The National Patchwork Championship in 2003 and first Spring Festival Challenge with “Silicon Chip” at The National Patchwork Championships in 2004.

It was during this time that I realised that I enjoyed making heavily embellished quilts and enrolled in some City and Guild courses in machine embroidery, to learn some new techniques, completing the Certificate in 2005 and the Diploma in 2007.  I  continued my studies for several years by taking a master class at Missenden Abbey with Janet Edmonds.

In 2000, I was one of the founder members of the Market Square Quilters group in Newbury, which has grown and flourished, holding various positions over the years.  I am also an active member of The Newbury Embroiderers Guild and also a member of TextileArt07 which was formed from one of my City and Guild groups.

For several years I ran workshops with my sister Sonia Clifton at my home, Highwood Farm in our renovated barn, but discontinued these to concentrate on my own work.   I have worked on various themes over the years but at present am concentrating on the delicacy of flowers.

I like to practice all types of textiles, though I mainly work in embroidery and  patchwork and quilting. I am constantly trying new things and although I sometimes work in a series, I often break off and work on something completely different. My work as a consequence is therefore quite diverse.